Hey guys!! Over the holidays, me and my family visited Hull Truck Theatre for the performance of ‘Oliver Twist’ that was running there. It was a modern adaption on the classic Charles Dickens tale with all the original characters. For those of you who aren’t familiar with it, ‘Oliver Twist’ is a story about an orphaned boy who ends up in the workhouse and after he asks for more food in a now iconic line, he’s sent away to a job which he’s dismissed from too. He is naively dragged into a gang of thieves and is chased by trouble from that point on. It’s an amazing story and after watching Fagin’s Twist back in October, it was lovely to see the story that Fagin’s Twist was adapted from on stage. So in today’s post, I will reviewing the ‘Oliver Twist’ performance at Hull Truck Theatre that ran there over the Christmas period.

THE PLOT OF ‘OLIVER TWIST’

Oliver Twist was born and raised into a life of poverty and misfortune in a workhouse. He was orphaned by his mother’s death at childbirth and his father’s mysterious disappearance so he was named by Mr Bumble, the parish beadle. He’s brought up with little food and comforts. One day, the desperately hungry children decide to draw lots and the loser must ask for another portion of gruel. This task falls to Oliver and so he is coerced into begging Mr Bumble for gruel with the famous phrase “Please, sir, I want some more.” 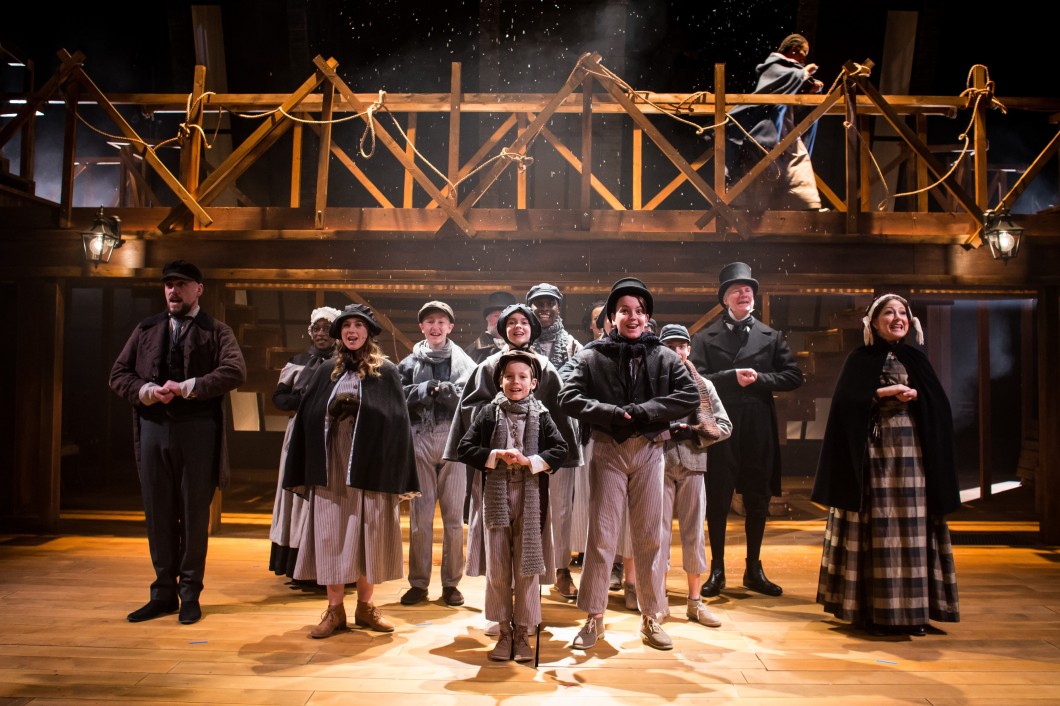 This causes a great uproar. Oliver is removed from the workhouse and sold to Mr Sowerberry, the undertaker, for £5 as an apprentice. Mr Sowerberry is partaking in an unhappy marriage so his wife takes a plethora of opportunities to mistreat Oliver. Oliver is also tormented by Noah Claypole, his fellow apprentice and Charlotte, the maidservant who is in love with Noah. Noah insults Oliver’s biological dead mother, causing Oliver to lash out and assault the much bigger boy. Mrs Sowerberry of course sides with Noah and manipulates her husband into believing its all Oliver’s fault. After Oliver is sent down to his room, he decides to escape to London to seek a better life.

In London, Oliver meets the “Artful Dodger”, a skilled pick-pocket and his sidekick Charley Bates. The Dodger provides Oliver with a free meal and tells him of an old lady in London who’ll “give him lodgings for nothing and never ask for change”. Grateful for the unexpected assistance and unable to see any fault in their pick-pocketing due to his naivety, Oliver joins them in returning to the old lady’s residence. The old lady is the infamous Jewish criminal Fagin (my favourite character! click here to find out why.) and Oliver stays in her residence a while, believing that they make wallets and handkerchiefs.

Soon, Oliver follows the Artful Dodger and Charley Bates to “make handkerchiefs”, only discover that their real mission is to pick pockets. The Dodger and Charley steal the handkerchief of an old gentleman called Mr Brownlow and promptly escape. When he finds his handkerchief has disappeared, Mr Brownlow whirls around only to witness a stunned, frightened Oliver dashing away. Believing he is the thief, Mr Brownlow and others nearby chase him and upon his capture, he is hauled before a magistrate. Interestingly, Mr Brownlow has second thoughts and seems unable to picture Oliver as a pick-pocket. No charges are pressed against Oliver and Mr Brownlow actually ends up caring for Oliver alongside his daughter Rose and his housekeeper Mrs Bedwin.

Meanwhile, Mr Bumble is flirting with a women named Mrs Corney as he stopped by to see her but they are interrupted by someone asking desperately for her. A women, called Old Sally, is on the floor dying but before she releases her last breath, she hands Mrs Corney a locket which she stole from Oliver’s biological mother and it has some kind of link to Oliver. Mrs Corney feels no shame in taking it as it’s very expensive looking and she returns to Mr Bumble and keeps it with her. 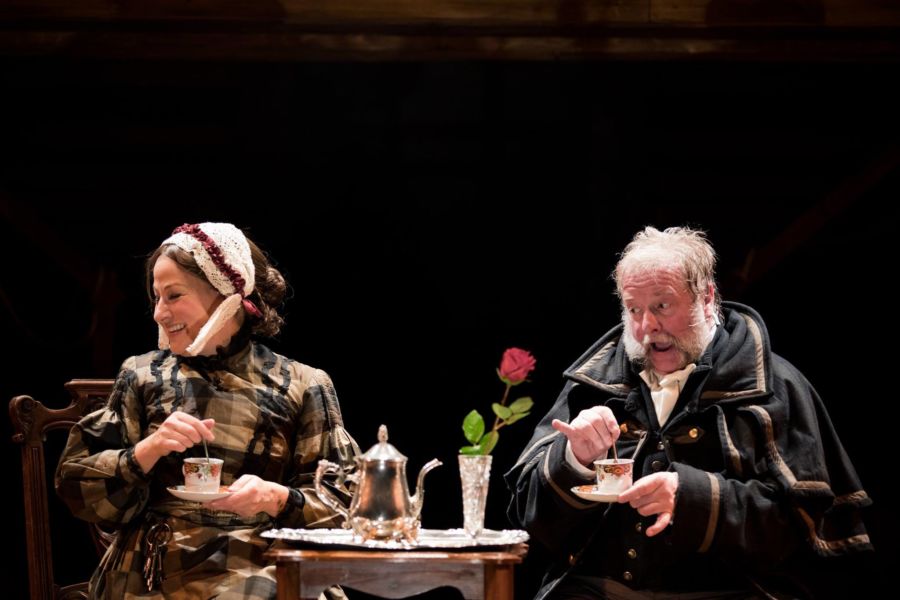 Oliver stays at Mr Brownlow’s house and flourishes with the love and attention they lavish on him. Mr Brownlow is curious about the mysterious boy whom is living under his roof and about his clandestine past but doesn’t want to coerce Oliver into telling him about it until he’s ready. Mr Brownlow’s neighbour believes that Oliver is deceiving them all and states that he’ll eat his head if he’s wrong. To prove that he is wrong, Mr Brownlow entrusts Oliver with the task of delivering some books to someone down the street and granting them with £5 which Oliver enthusiastically accepts. Unfortunately, Fagin decides that Oliver should be brought back to the hideout in case he snitches to the police so she enlists the help of Nancy, one of the gang members whom Oliver previously met and her abusive boyfriend Bill Sikes. They kidnap him, steal the £5 and strip him of all his expensive clothes. 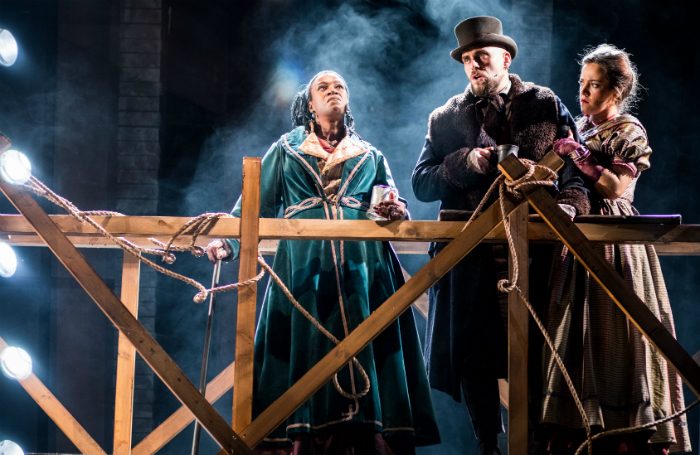 Nancy, feeling guilty about her part in the kidnapping, appeals to Bill and begs him to free Oliver. Bill threatens her and then kisses her into submission. But this can’t satisfy Nancy and she rushes to Mr Brownlow’s house to offer them information about Oliver’s exact location. Mr Brownlow believed that Oliver wouldn’t forsake them as it seemed he had and he was offering money to anyone who could provide them with useful information. Mrs Corney, now Bumble and her new husband appeared at the Brownlow residence, flaunting the locket and telling stories about Oliver’s time at the workhouse. They are rebuked by Mr Brownlow for keeping it for so long when Oliver was clearly the rightful owner but they are satisfied when he pays them and sends them on their way. After that, Nancy arrives and informs them of Oliver’s kidnapping, admitting to the part she played in it. She also informs them of where his place of confinement is and promises to help them bring him home. Rose and Mr Brownlow are jubilant at the information and thank Nancy for telling them. Nancy has no idea that by orders of Fagin, Dodger was tailing her the entire time and soon, her betrayal will be revealed.

Nancy helps Oliver escape back to Mr Brownlow and Rose and he runs into their embrace as soon as he catches sight of them. Because of Nancy’s kindness to them, they offer Nancy a place in their home which she declines as she claims it’s too late for her now. Nancy returns back to Fagin’s hideout and is met with a furious Bill Sikes. Dodger returned and reported her findings to Fagin who in turn told Bill. She tries to cajole him into forgiving her but it’s too late and he murders her instead.

After that, things begin to unravel for the gang. The police are tipped off and arrest Fagin for the deception and thieving. Bill Sikes escapes but he’s haunted by the memory of Nancy and hallucinates a group of children burning a life sized doll of himself on a bonfire like people would do with a Guy Fawkes doll instead. He faints to the floor as the lights dim and the cast reappear to a thunderous round of applause as they all take a bow.

Overall, I loved the performance. It loosely followed the plotline of Charles Dickens’ original novel, with some parts cut out, possibly to prevent the performance from being too long. There were several parts with singing and dancing added in which really added an extra element to the show and the acting of the cast was really amazing. Each of them completely embodied their characters and brought them to life on the stage. The set was pretty cool too with an overhead wooden balcony for characters to stroll and run along or hide and observe from. There was also a trapdoor which allowed characters to have the element of surprise as they popped up from down below. Possibly one of my favourite parts of the show was the fact that females had been cast as Fagin and the Artful Dodger and they did an awesome job of breathing life into their characters. I also thought the casting of Oliver was perfect and the boy who played him was incredible to watch on stage. My favourite characters of the show were Fagin and Nancy. I loved Fagin because of her villainous, almost admirable ability to run an entire pick-pocketing gang in London. Evil genius or what?! Think of what an amazing heroine she could be if she used her ability and influence for good! I loved Nancy though because she was the unlikely but true heroine of the novel and that is something that portrayed in pretty much all the different film and on stage adaptions of the novel. She was so brave to first of all admit to Oliver’s carers that she kidnapped him because she had no idea how they’d take it or what they’d do with the information. Luckily, they were very grateful to her. But second of all, she was brave to betray her fellow gang members and her abusive lover because she probably knew she’d be severely beaten at the very least, if not killed and yet she still worked to liberate Oliver from their evil clutches.

Thank you for reading this blog post! What’s one of your favourite stories? Let me know in the comments!! There’ll be another post out soon but until then bye for now!