Hey guys!! This week, me and my family witnessed an incredible acrobatic performance entitled ‘Driftwood’ as part of city of culture. The event occurred at the venue of Hymers College in Hull and highlighted the skills of 5 amazing acrobats from the Australian Circus company Casus. Over the course of the performance, they succeeded in completely mesmerizing the audience with a mixture of unique, daring stunts that were signature to them and showcased intense levels of strength and gracefulness. Unfortunately, the audience weren’t permitted to capture photos during the performance. So in today’s post, I’m going to be reviewing ‘Driftwood’ and offering my honest opinion of it.

To begin, all the lights dimmed and there was complete darkness until a single red light irradiated the stage and revealed the 5 acrobats who were spread out in an ark shape. The sudden light prompted them all to race to the middle and gracefully execute their first trick where they all bent their legs and leaned back onto the person behind them, forming a circle of bodies. Each person extended one of their arms causing the light to ascend back up again. This lead onto a group section of no prop acrobatics where they contorted their bodies, balanced in crazy positions and wowed the audience with their daring nature. I absolutely loved that a lot of their choreography during this section incorporated all of them because it must be extremely hard to invent tricks where all 5 people can be involved in it at once. 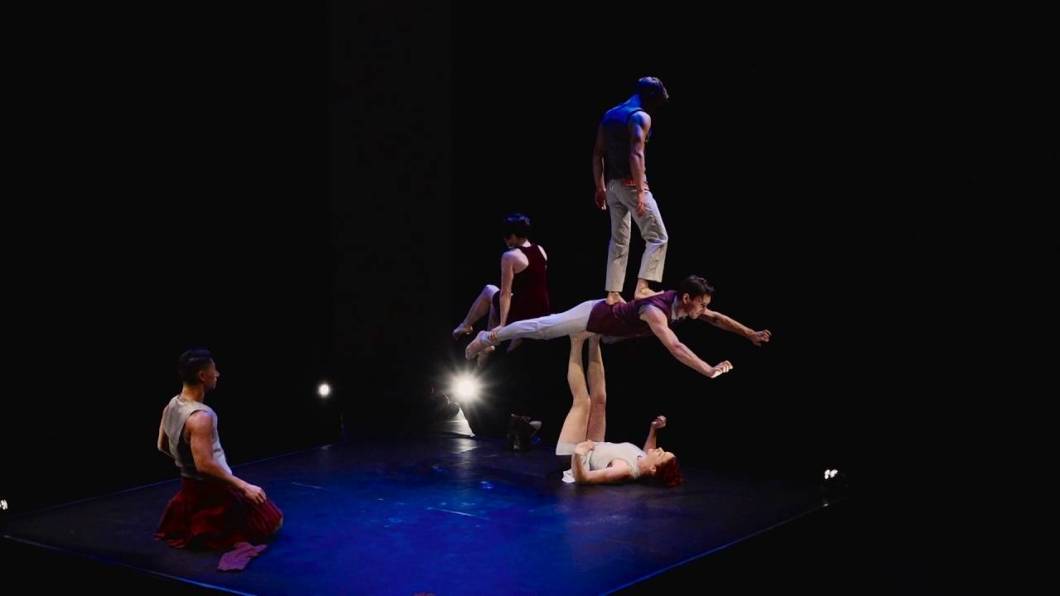 After that, all of the acrobats exited the stage apart from one female acrobat. As a transition onto the next part of the performance while the others prepared themselves, she played around with the red light which wouldn’t permit her to stand up to her full height and persisted to force her down lower and lower until she was on the floor. All of the acrobats performed a humorous rountine of this sort with the red light between parts of the performance and each acrobat included different tricks which caused it to be fresh and interesting each time. Also, it added some humour to the performance overall.

Next, the other girl gymnast performed a solo on a hoop that hung by a rope from the ceiling. It was spectacular to watch her effortlessly progress through all her moves with the perfect mixture of elegance and power. I was transfixed and unable to peel my eyes away from her as she gracefully executed some extremely adventurous choreography like sliding into front splits on the side of the hoop which was swirling around. Her fellow performers observed in a circle around where the hoop was, ready to assist her and at one particular point to gain momentum, she delicately sprung across all of their shoulders. You could clearly see the immense hard work she’d poured into her solo and I really applaud her for some of the tricks she attempted which was very daring. 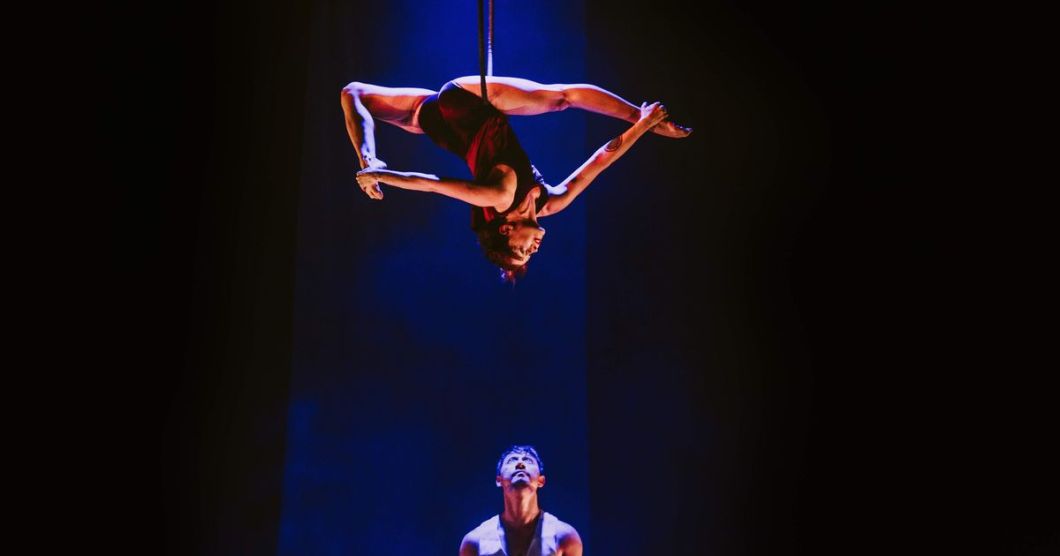 Moving forward, all of the performers exited the stage aside from two of the male performers. One was very tall while the other was shorter and they’d ended up entangled in each others grasp. The taller one politely attempted to escape from the hug they were sharing but the other one refused to let go and this fact was what their duet centred around. All kinds of crazy tricks were performed as the taller guy strived to evade the smaller guys clutch but no matter how he warped his body, it wasn’t until the end of the duet that he reclaimed his freedom and planted a sweet kiss on his friend’s cheek. Their relationship reminded me of a cute father-son relationship and it was a hilarious part of the show to witness.

After a slight break, where another of the performers interacted with the lamp, the next section of the performance was introduced as one of the other acrobats launched a hoop around the acrobat that was playing with the hoop and it landed squarely around them. This resulted in a section of the show being dedicated to a trio with hoops as props and it was extremely fun to observe. They executed a number of cool tricks such as spinning multiple hoops on their bodies at once while also pivoting, launching the hoop along all of their backs and tossing a hoop round to the person next to them while also catching one at the same time. You could definitely tell particularly at this point in the performance that they were really enjoying performing for us.

Following this was a duet between one of the female acrobats and one of the male ones. It was triggered when the other performers launched a pile of clothes at the male acrobat and wheeled on a clothes rack for him to arrange them onto. All but one of them vacated the stage and the female acrobat that had stayed assisted him in flicking them onto the rack. They invented a game out of the task of hanging up clothes and added a real element of fun to it. There were clothes soaring through the air as they tossed them back and forth to each other and eventually onto the rack. It was extremely rare for any of the clothes to collide with the floor and with their teamwork, they completed the task and sorted all the clothes onto the rack.

Next, there was another duet, again between one of the female and one of the male acrobats. This time, they transpired onto the stage with a stack of square blocks. The girl split them into two equal piles and together, they arranged them into the exact positions they needed to be in. Then, the boy balanced on top of them and the girl hurried to move them into the next location they needed to be in. The duet concentrated on the girl arranging the blocks into the next position on the ground so the boy could execute a handstand, cartwheel or some kind of other daring trick whilst only keeping his hands and feet on the blocks. This part of the performance was very original for me because I’d never viewed anything like this in an acrobatic/circus performance before.

After that came a duet between the two girls. The use of props was non existent to start off with as one girl climbed on top of the other one and avoided touching the floor in that part of the routine. This lead onto the use of the swing as a prop and both of the girls supported each other in the tricks they executed. One of my favourite tricks from this part of the routine was when both girls suspended themselves from the swing and hung upside down from opposite sides. They looked completely identical and uniform and they managed to hold the position for a fair amount of time. After their duet, another one of the acrobats appeared on stage and the two girls swapped with him so he could have a solo on the swing. It was interesting to compare the tricks that could be performed as a solo and as a duet on the swing. The male acrobat completed some amazing tricks in his rountine just like the two girls had and managed to highlight an equal amount of elegance and strength.

Following that was the final duet of the performance between two of the male acrobats. Similar to the girls duet, it began with no props or equipment and they performed lots of adventurous, traditional acrobatics such as one balancing upon the others shoulders or one distributing all his weight onto the other one’s hands as he performed a handstand. After they’d performed a number of breathtaking stunts, they encompassed the use of the clothes rack from earlier on in the show into their duet. One guy stabilised the rack on top of his head as the other guy leaped upon his shoulders. Then, the guy on top of his head shimmied up the rack until he was balanced right on top of it. It was scary but amazing to witness. After they’d executed a few other tricks that linked with the rack, the duet developed into a solo for the shortest of the three male acrobats. His prop was a rope, dangling from the ceiling. To start with, he scaled up it until he was about half way up. His rountine consisted of him contorting his body into weird positions around the rope and at one point, he even wrapped the rope around his neck. His teammates were stationed around him, ready to assist him if they were needed and when he needed the rope to gain some momentum and twirl around a bit, they were only too happy to help. One of his fellow acrobats revolved the rope from the ground and it slowly gained speed until it was whirling around like a tornado. It looked like a lot of fun but I was quite shocked when he didn’t even seem the slightest bit dizzy. 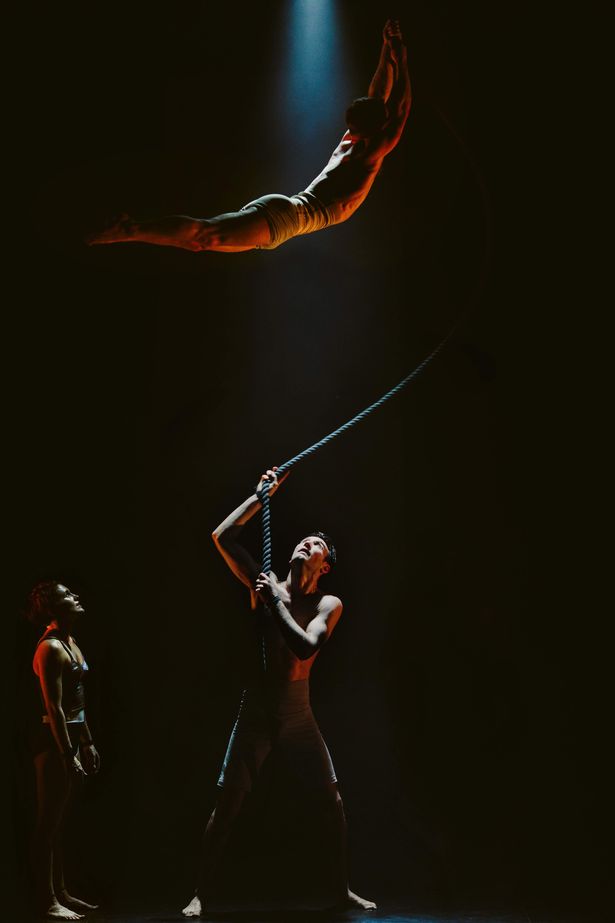 It seemed only fitting that the routine ended like it had initiated, with a group routine. Yet again, they strived as one big team and found ways to include every one in most of their moves and the audience were completely enthralled with their bold, fearless nature. One of my favourite moves from this section was when two of the boys stretched out the body of one of the girl gymnasts and used her as a skipping rope for the others to hop over. I thought it was really daring and inventive of them since I’d never seen a trick like this before. Right at the end, they executed the same trick from right at the beginning of the show when they all bent their legs and leant back on the person behind them to form a perfect circle. Someone clicked their fingers to darken the room and that’s where the performance ended.

Overall, I really enjoyed ‘Driftwood’ and I felt that it was one of the best acrobatic/circus acts that I’d ever witnessed. It flowed really well and was extremely well executed with clever, daring tricks. I would definitely like to watch the performance and experience it again.

Thank you for reading this post!! Have you ever seen a circus performance? Let me know in the comments!! There’ll be another post out soon but until then bye for now!!