Hey guys!! This weekend, Hull has been hosting as well as celebrating the 10th anniversary of one of its most cultural events: The Freedom Festival!! As part of the festival, a variety of different events have been going on inside Hull’s city centre which fit in with the festival’s theme of the expression of artistic freedom. I’ve been looking forward to the Freedom Festival all year and although I didn’t experience every single event since that would’ve been impossible with so much going on, the events I did go to were incredible. So in today’s post, I’m going to be describing my experience of the Freedom Festival and giving you my honest opinion of it.

When we first arrived at part of the Freedom Festival which was happening in and around Humber Street, the atmosphere was insane. Everywhere you looked there were people, smiling and enjoying the vast range of events the Freedom Festival had to offer. All of a sudden, the crowds in front of me split through the middle to let through a parade of about 4 enormous black dinosaurs, controlled by people who were inside of them. They made their way down the street in the exact way you’d expect dinosaurs to, stopping every so often to cheekily stretch down their long necks and surprise unsuspecting onlookers. Dinosaur like howls could be heard as they travelled along the street and then back again, with people rushing to follow after them. I was blown away at how spectacular the dinosaurs were and I couldn’t wait to experience more of the Freedom Festival after that.

Next, we headed over to Queens Gardens which was hosting another area of the Freedom Festival and there was a buzz of activity everywhere you looked. We passed a graffiti artist using spray cans to create a spectacular piece of artwork, an event called FEASTival where volunteers across Hull had, grown and cooked their produce for a ceremonius feast celebrating the Freedom Festivals 10th birthday and a duck fountain, spouting water at anyone who dared to cross it.

The event we decided to watched in Queens Gardens was performed by the Bullzini family and it was a tightrope and acrobatic performance called ‘Equilibrius’!! ‘Equilibrius’ started off with the male performer Christopher Bullzini gracefully travelling across a tilted rope that lead up to the main tightrope whilst the female performer Phoebe Bullzini laid out washing to dry on the ropes that connected the tightrope apparatus to the ground as part of her character. Once on the tightrope, Christopher began by carefully walking across the tightrope and back and as the performance went on, the difficulty level of tricks performed got higher and higher. I was blown away at how incredibly skilled the Bullzini family were and although they made doing a handstand on the tightrope, riding a bike across the tightrope and doing the splits on the tightrope look effortless you could definitely see the hard work and dedication they’d put in to perfect their show. I also liked the fact that their performance featured some role play in it where Phoebe started off being quite scared of the tightrope and clinging onto Christopher for dear life. However, whilst she was finding her confidence on the tightrope, Christopher found her washing and began to take it all down. This angered Phoebe and she rushed down to the ground to pick up all her washing just so she could throw it at Christopher out of annoyance. They made up though and decided to do a duet together and at the end they hugged. Phoebe realised they had an audience however and became quite embarrassed. The performance ended with them tying a washing line to either side of the tightrope apparatus with letters on each piece of clothing spelling out ‘The End’ to which they were met with a thunderous round of applause. I really enjoyed their show and I would definitely love to see them both in action again!! 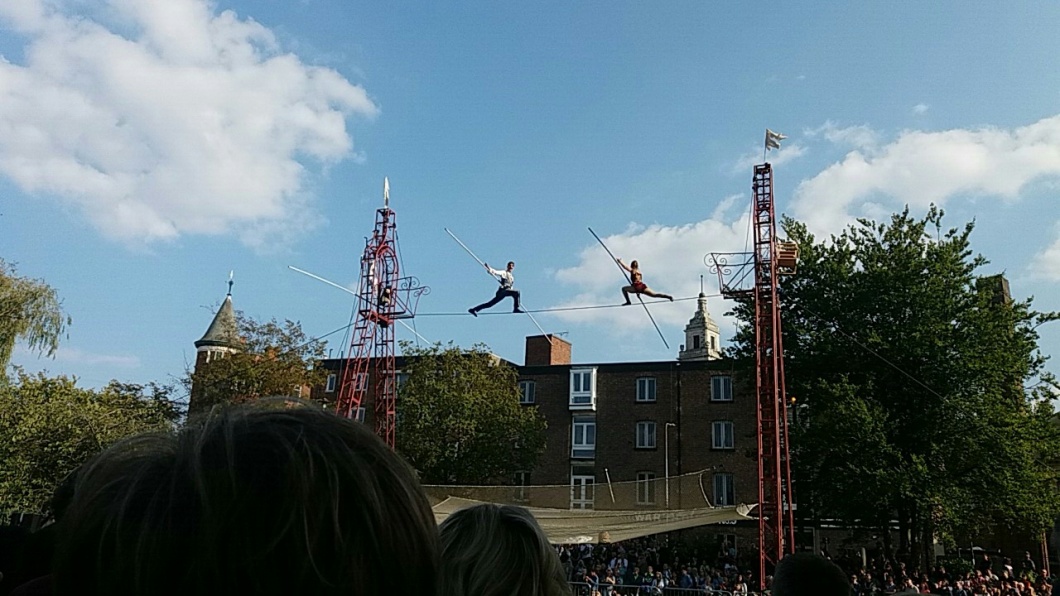 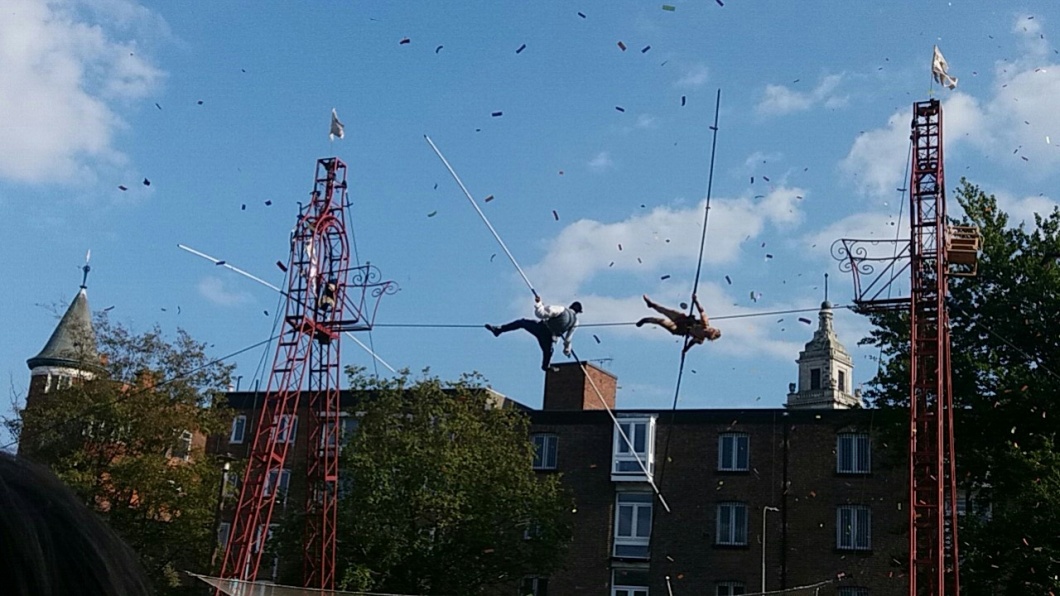 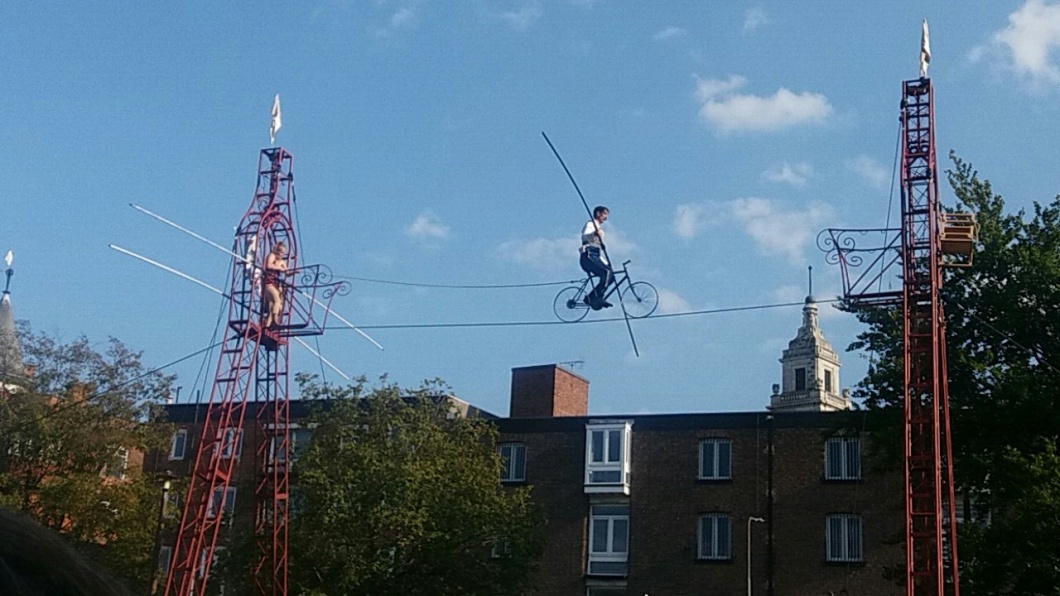 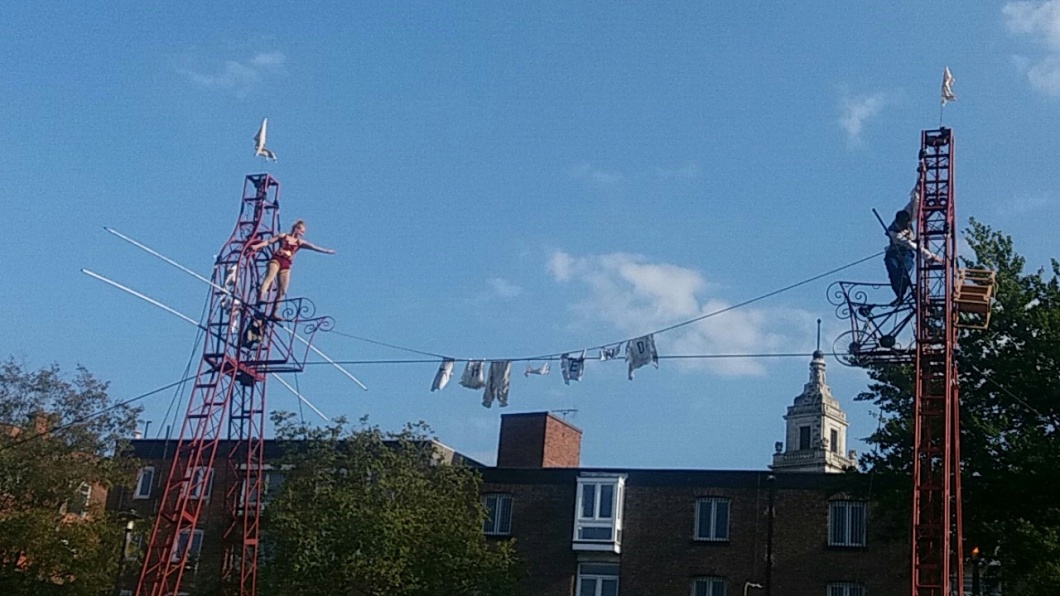 When we were walking back to our car which was parked near Humber Street, out of nowhere, a bureau on wheels surrounded by people dressed to appear older than they were, came down the street with pop music blaring out of it. The grannies and granddads began to sway along to the music and soon enough they had started to dance hip hop style which is not what you would really expect them to do. The whole thing was so random but so cool at the same time and I really enjoyed seeing the grannies and granddads boogie!! 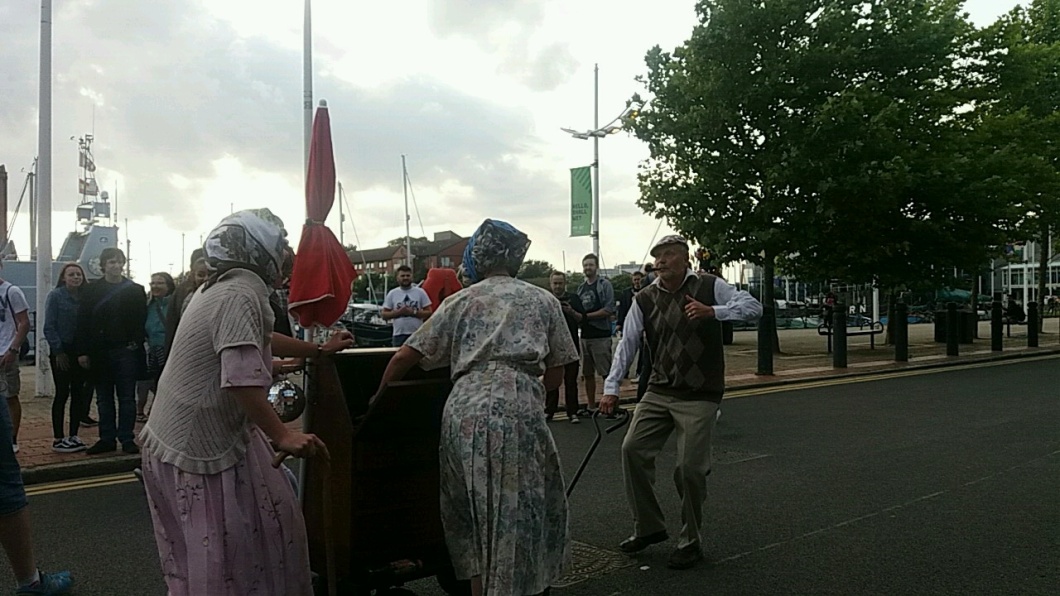 Later on, we returned to Albion Street Car Park in Hull to watch another Freedom Festival event which was a dance performance with Southpaw Dance Company alongside about 100 members of Hull’s community and it was called ‘RUSH’. ‘RUSH’ was split off into separate dances, each focusing on a different struggle of society both nationally and locally such as unemployment, homelessness and becoming a teen mum. Images that fit in with the theme of the dance were cast up onto the derelict building that was once home to BHS and music that fit in with the mood blared out into the crowd whilst the dancers danced their hearts out!! I loved that each dance had a different storyline which really educated you about problems we may face as a community and the dancers really executed it well through the use of props, lighting and music. Throughout the show, I constantly marvelled how from start to finish the dancers all performed with high energy and emotion and they never faltered once. You could see the hard work that had gone into this performance also and how well the members of Hull’s community blended in with Southpaw Dance academy since I couldn’t tell who was part of the dance academy and who wasn’t. As their performance ended, the crowd that had gathered to watch gave them a massive, well deserved round of applause!! I really enjoyed ‘RUSH’ as well as ‘Equilibrius’ and although they were both very different performances, they were the same in the fact that they were both part of the Freedom Festival which is an expression of artistic freedom and risk taking which these both demonstrated. 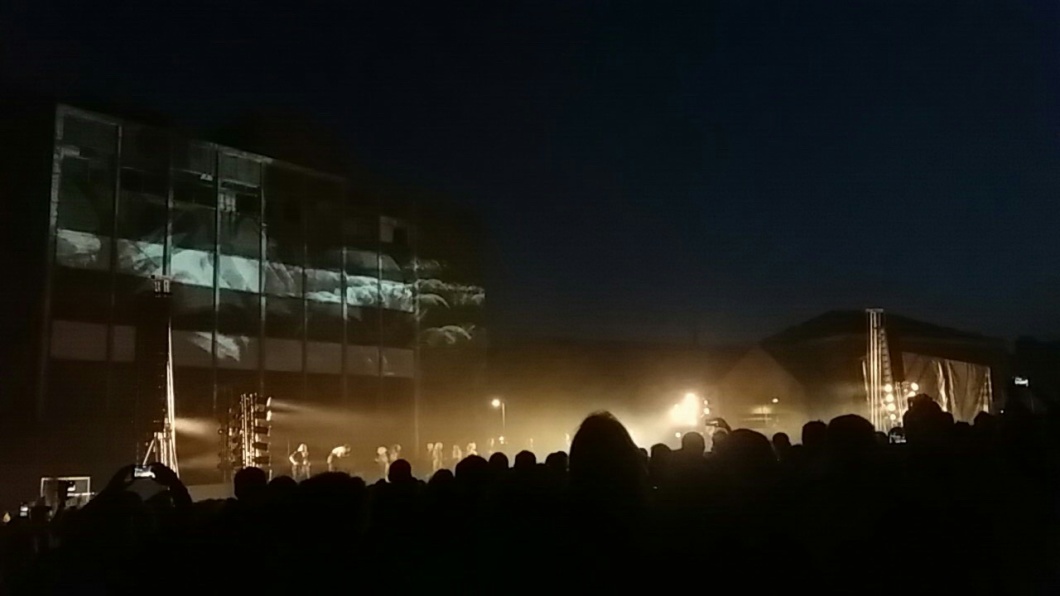 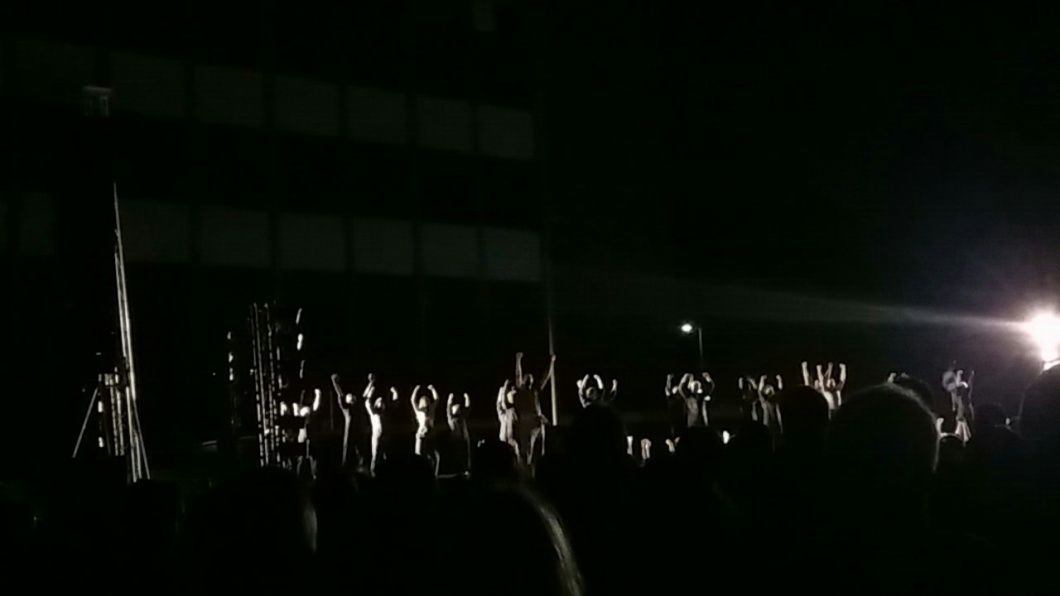 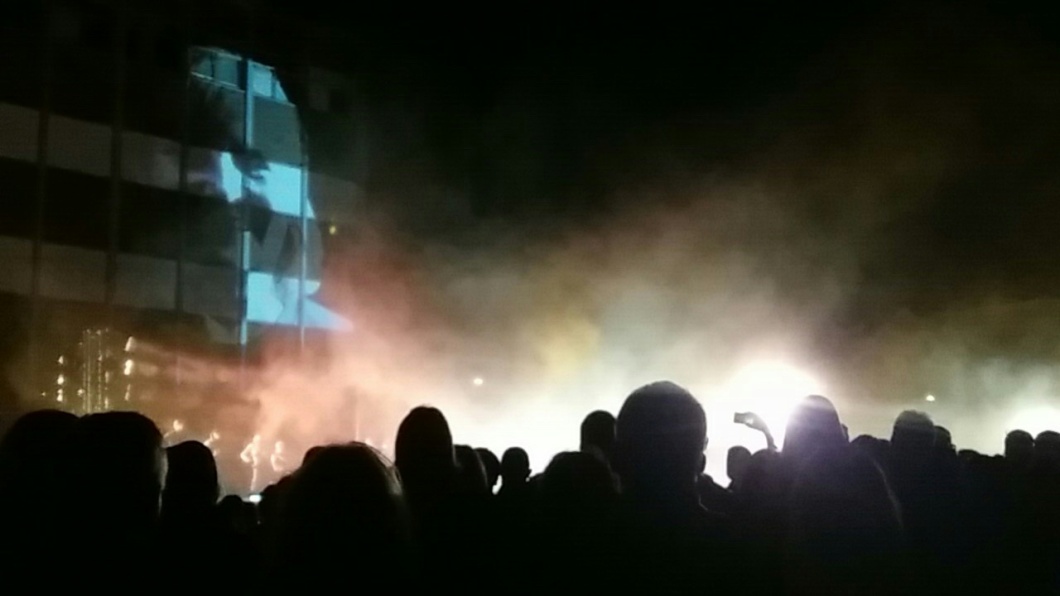 Thank you for reading this post!! Would you consider coming to Freedom Festival 2018? Let me know in the comments down below!! There’ll be another post out soon but until then bye for now!!