Hello guys! So after the fireworks on the 1st January to open City of Culture, Hull welcomed ‘Made in Hull’ which showed different aspects of the city in different light/sound shows. They were absolutely spectacular to watch and although we didn’t get to see all of them since we didn’t have time I’m glad we got to see some of them.

The first projection we watched was called ‘Dignity of Labour’ and it was in Scale Lane on the side of a house and it tackled the issue of unemployment, benefit sanctions and some visions of hope for a city that’s had it’s share of tough times. It used movement, music and words to portray it’s message and it was stunning to watch. I would say as a teen it was quite hard to understand its message however I still enjoyed it and was left really excited to see the next projection/sound show.

The second part of ‘Made in Hull’ we went to was actually the soundscape in Zebedee’s Yard. There were speakers playing the sounds from a Hull city match against Newcastle United and as you heard the crowd chanting and roaring at the football match it felt like you were there with them experiencing it all. I felt that it definitely lived up to my expectations after seeing the first projection and even though it was really loud I really enjoyed it.

We then moved on to Queen Victoria Square and watched the third part of ‘Made in Hull’, called ‘We are Hull’. It was projected onto three different buildings: the Ferens Art Gallery, the Maritime Museum and the City Hall. You could watch it on either building so we chose to watch it on the Maritime Museum since there were less people watching it so you got a better view of it. ‘We are Hull’ told the story of the past 70 years in the City and it was amazing to watch. I really enjoyed it and left Queen Victoria Sqauare with high expectations for the final projection. 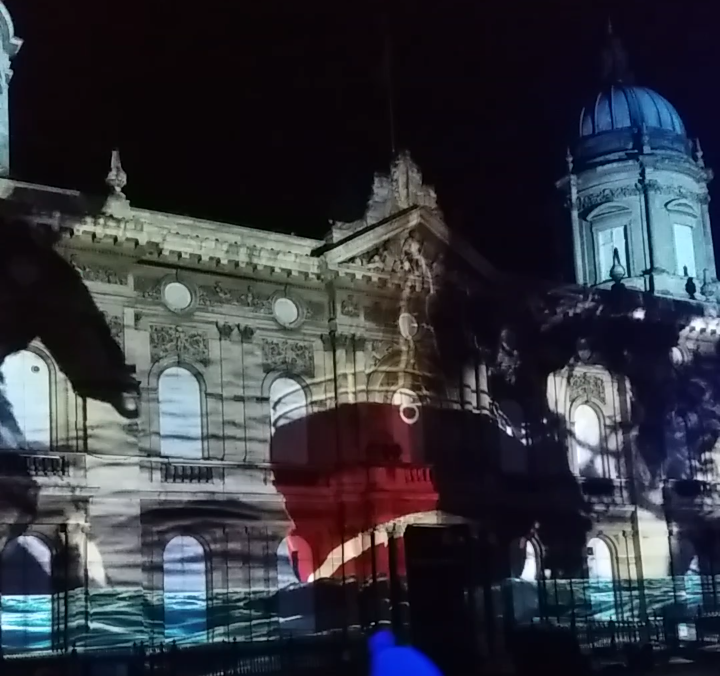 The final projection we saw was the one onto The Deep and it was absolutely incredible. ‘Arrivals and Departures’ told the story of all the different people and animals coming in from distant shores and told you of Hull’s fishing heritage. I definitely enjoyed this projection the most since the way it portrayed it’s story was amazing. After watching ‘Arrivals and Departures’ I left Hull City Centre enthralled by the amazing projections that I’d watched as part of ‘Made in Hull’.

I would rate this event 9 out of 10 stars, docking one star for how cold it was outside! But obviously an event like ‘Made in Hull’ needs to be in the winter otherwise it wouldn’t be dark enough for you to be able to see the projections. However apart from that a really enjoyable event which I would definitely like to see again maybe at the end of 2017?

Thank you for reading this blog post and sorry that it’s so late after the event!! Since I’ve only just set up my blog 2 weeks ago I’ve had to catch up on all the events I’ve missed out on blogging about. So to summarize what I’ve already said I really enjoyed ‘Made in Hull’ although yet again like at the fireworks the cold got the better of me and I couldn’t feel my fingers or my toes!!